Angela Merkel is the de facto head of the European Union. Forbes Magazine has named her the most powerful woman in the world a record 14 times. And, in light of Trump’s isolationist approach to foreign policy, she’s recently been called “the Liberal West’s Last Defender” and the new de facto “leader of the free world.” But she’s also been called an enigma—due to her understated style and lack of a clear public persona. So how did this mild-mannered scientist end up as one of the most powerful people on the planet? A quick Human Design Study of Germany’s enigmatic leader holds many of the answers.

Born into the Interpersonal Life Theme of “Obscuration,” Merkel has a 5/1 Projector Design with Splenic Authority. This means that she has a unique ability to continuously stay one step ahead of her competition by concealing or obfuscating her intentions. Throughout her life, this has enabled her to manage a very particular balancing act that others would find difficult to emulate. 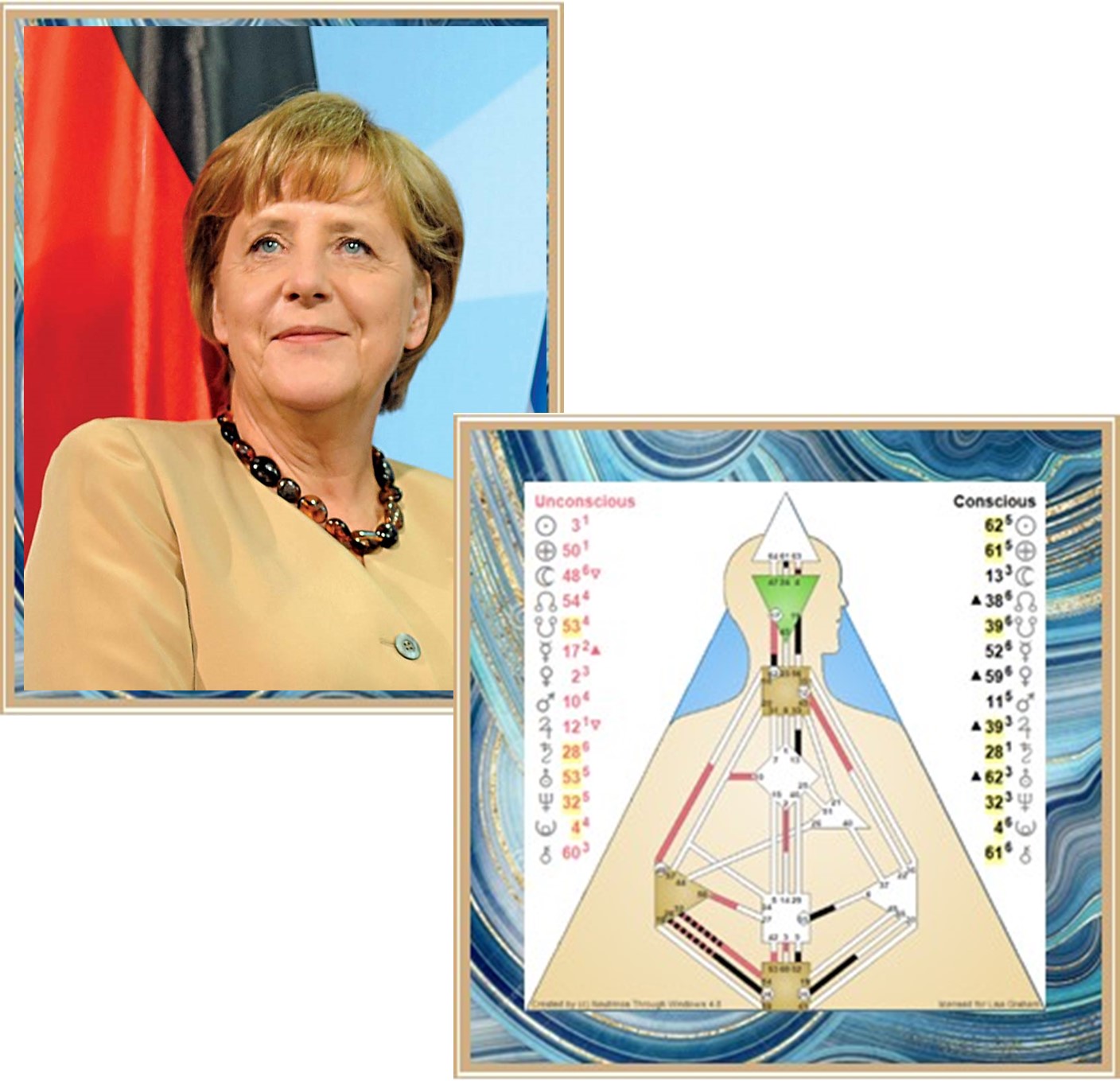 Her story begins behind the Iron Curtain, where religion and state communism combined to both confuse and inspire young Angela. When she was just three months old, her father, a Lutheran pastor, took a post at a church in East Germany and relocated the family to East Berlin. In a culture that was heavily skeptical of religion, Merkel wrestled with her status as the daughter of a pastor. And when she reached the age of 14 she decided to forgo the secular coming of age ceremony which was common in East Germany and instead opted to be confirmed in her father’s church.

While religion seemed a settled subject for young Angela, her politics would need a little more time in the oven. Around the same time as her confirmation, she joined the official Communist Youth Movement sponsored by the Marxist–Leninist Socialist Unity Party of Germany. But many debate whether it was a merely practical move on her part, as those who chose not to join often found it difficult to gain access to higher education. Many doubt her dedication to the Communist project due to her sub-par grades in her school’s compulsory courses on Marxism-Leninism. And when applying for an assistant professorship, the Ministry for State Security asked Merkel to report on her colleagues. She refused.

Merkel would go on to receive her doctorate in physical chemistry. But, after finding work as a researcher and publishing several papers, the east/west tension that had shaped her early life would come to a head in the form of the fall of the Berlin Wall. It was this event that sparked her entry into politics and public life.

One month after the wall came down, Merkel joined the Democratic Awakening, a new party that championed the spread of democracy throughout East Germany, and after the first election in East Germany, she became the deputy spokesperson of the new pre-unification government. A year later, her party would merge with the East German Christian Democratic Union, which then merged with its counterpart in the west. Ten years later, she would become the leader of her new unified party, and five years after that she would become Chancellor of Germany.

Her Human Design Study shows us that her skill in politics comes naturally. Specifically, her Pluto in Gate 4, in Lines 4 and 6, which gives her the mental capacity to out-think most scholars and politicians. This, coupled with her Channel 17-62, gives her the means to present logical points of view that are difficult, if not impossible to counter.

If politics is a balancing act, a game of compromise, then Angela Merkel is a natural. From day one, she had to bend and stretch herself against and between the opposing poles of her religion and the prevailing political culture of her surroundings. And she was able to adeptly swerve the pitfalls of dogma on her way to success in her chosen fields. This lifetime of adaptation might be the reason people see her as lacking a strong public presence or persona, but it also might be just the thing that has enabled her to maintain her position longer than any other leader in the western world.